After surveying people nationwide last year about the condition of their streets, Domino's Pizza chose Walla Walla as the recipient of its Paving for Pizza award in Washington. The reward: $5,000 to spend on asphalt for road repair.

We selected five streets for which the $5,000 could make a real difference, and we invited you to vote for your favorite. The winner was Highland Road. We repaved this section of roadway on June 20, and then repaved damaged section to the west, using City funds to purchase materials.

We invite you to take a look at the information we've included on this page for more information about street repair. If you've ever found yourself asking something like, "Why doesn't the City fix my street?" or "Does the Public Works Department care about the condition of the roads at all?" you should be able to find an answer to your question.

Thanks for helping us decide which road to fix up; we appreciate your input!

Everything you wanted to know about street repair

How long will this band-aid last?

It depends on the condition of the road base below the asphalt. For some roads, it might last four or five years; for a surface like Highland Road, it will likely only last a couple of years.

Why are some of Walla Walla’s streets in such poor shape?

In a word: funding

That same year, Walla Walla lost $347,000 annually due to the elimination of Sales and Use Equalization Funding, which was a state sales tax that was distributed to cities based on population. Overall, in the past 32 years, these changes have reduced our potential revenue by $55,164,000 — an average of over $1.7 million each year.

When this dedicated federal and state funding dropped, it fell to the cities to fund street maintenance. This money has to come from the General Fund, so Streets has to compete with other departments for funds — including Police, Fire, Library, and Parks and Recreation — because there is limited money to go around.  Increasing the Streets budget would mean reducing City services elsewhere.

Where can cities get money for street maintenance?

Cities have a variety of options for increasing their budget to maintain roadways. Many of these involve adding revenue through taxes.

Options Walla Walla does not currently use:

What funds does the City currently have to fix roads?

The City's Street budget is about $2.9 million per year. But that doesn't mean we can put $2.9 million worth of asphalt on the roads. That total includes expenses such as vehicle maintenance, pay for workers, fuel, and seasonal snow and ice control.

Walla Walla's Transportation Benefit District (TBD) 0.2% sales tax generates about $1 million annually for street projects. These funds can only be used on transportation-improvement projects, which are selected based on feedback from residents. (Click here to view the relevant sections of the City's 2011 Citizen Survey, in which residents were polled regarding the streets they felt were in most need of repair.) The following map shows the TBD-funded projects the City has completed since 2013: 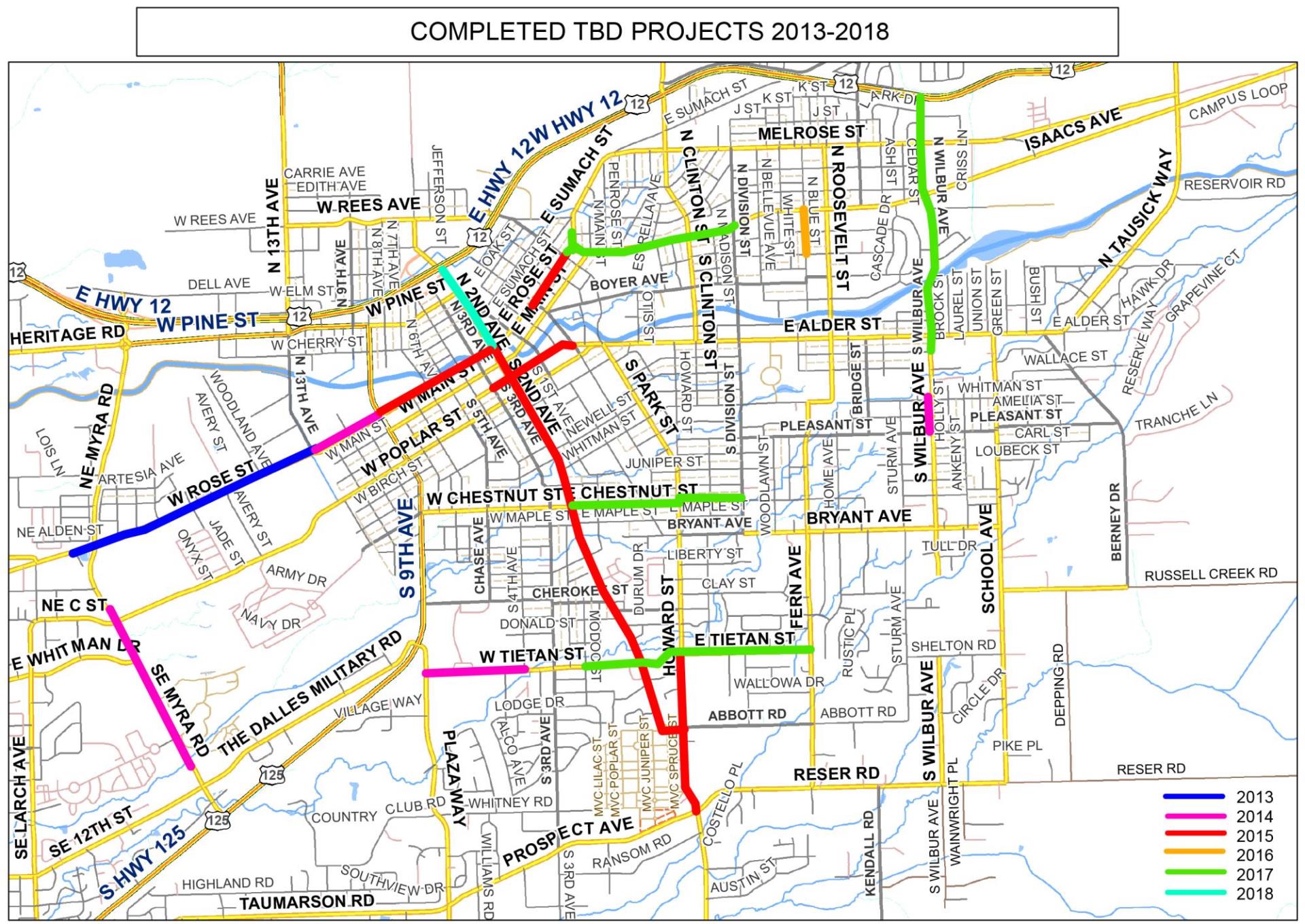 The City's Infrastructure Repair and Replacement Program (IRRP) generates about $4.5 million each year. These funds can only be used on roads with the failing trifecta: failing water lines, failing sewer lines, and failing streets. This map shows the IRRP projects we've completed since 2010: Where do the funds in the City's Streets budget come from?

Money for the annual Streets budget comes from a variety of sources:

Highland Road is really bad; why doesn't the City just fix it?

The simple answer is that the City doesn’t have the budget to dedicate to this roadway.

City forces are limited by state law in the amount of work they can self-perform on a project to $65,000, including labor, equipment, and materials.

Highland Road doesn’t currently score high enough on the Transportation Benefit District (TBD) list of eligible streets to make it a top priority repair project (see the image below). And because the utilities beneath the road are in good condition, it isn’t an eligible Infrastructure Repair and Replacement Plan project .

Below are are some of the results of the resident poll we did when planning the current TBD. Even back in 2012, Highland was tied for the least-traveled road among the top 25 on the residents' list (denoted by the "ADT's" — average daily traffic — category), ranking 21st overall when factoring in poll results and traffic volume. The roadways that ranked highest on this list are the ones we have applied, or will soon apply, the TBD funds toward.

If residents don't form a Local Improvement District to repair Highland, perhaps with more publicity around this roadway it will rise high enough on the next poll to receive a revamp through the next TBD, provided this is renewed when it expires in a couple of years.

What would it cost to fix Highland Road?
The current estimate is $1.9 million.
Could the city pursue a grant to fund the fix?
Residential roads are not eligible for grant funding. Only the more significant roads like Rose Street, Plaza Way, Isscas Avenue, Howard Street, etc., are grant eligible.
What other options does the city have to fix Highland Road?

A local improvement district (LID) could be formed to pay for reconstruction. If the majority of property owners within the benefiting area choose to participate, the property owners essentially take out a 10- to 20-year, tax-free loan to pay for it.

If the TBD sales tax is renewed for another 10-years in 2022 AND citizens rank it high enough when the new “fix-it” list is generated, Highland Road might move up the funding list sufficiently to be fixed in the next 10-year period (2022-2032).

Do Walla Walla's roads really have more craters than the moon?

Probably not — but maybe... In any case, City crews reduce the number of potholes in our streets almost every day — over 5,000 this year, and counting.

Where should the City spend the $5,000 from Domino's Pizza?

A crew from the Street Division checked out the roads we've heard the most comments about. We decided on five sections of roadway that could be largely repaired with $5,000 worth of asphalt.

After two and a half weeks of voting, area residents selected Highland Road as the roadway most in need of repair. We performed the repaving work from June 18-20. 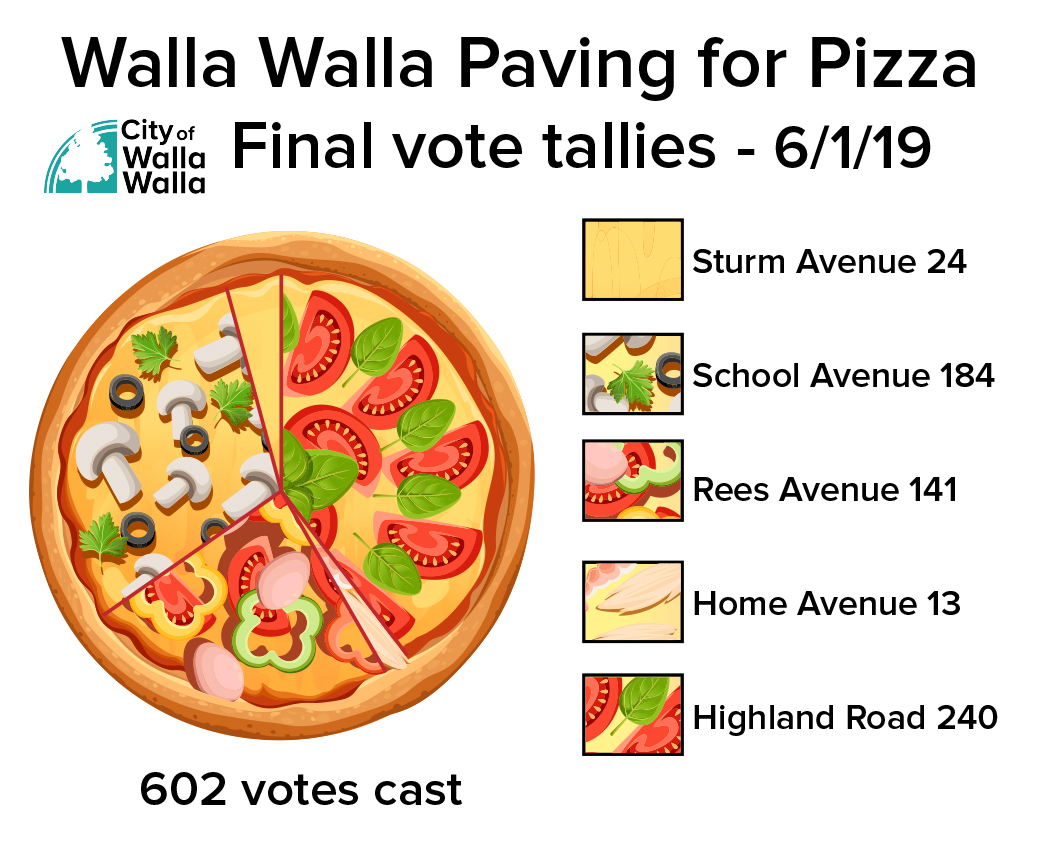